Kieran Beville opens his book with the appropriate chapter heading, Making a Start, and some advice from Stephen King: “The scariest moment is always just before you start.” This is about getting oneself to sit and face the blank page. Not an easy task, as most writers will confirm but a necessary one in order to put words together and carry on. It is sound advice which Beville repeats throughout this book. Further on, under the subheading, The writer’s life, he states, “As you aspire to be a writer you ought to view life as a writer would.” Literally, everything is grist to the mill, the stuff of writing, and the author provides some judicious reflections on the development of imagination and invention of story. 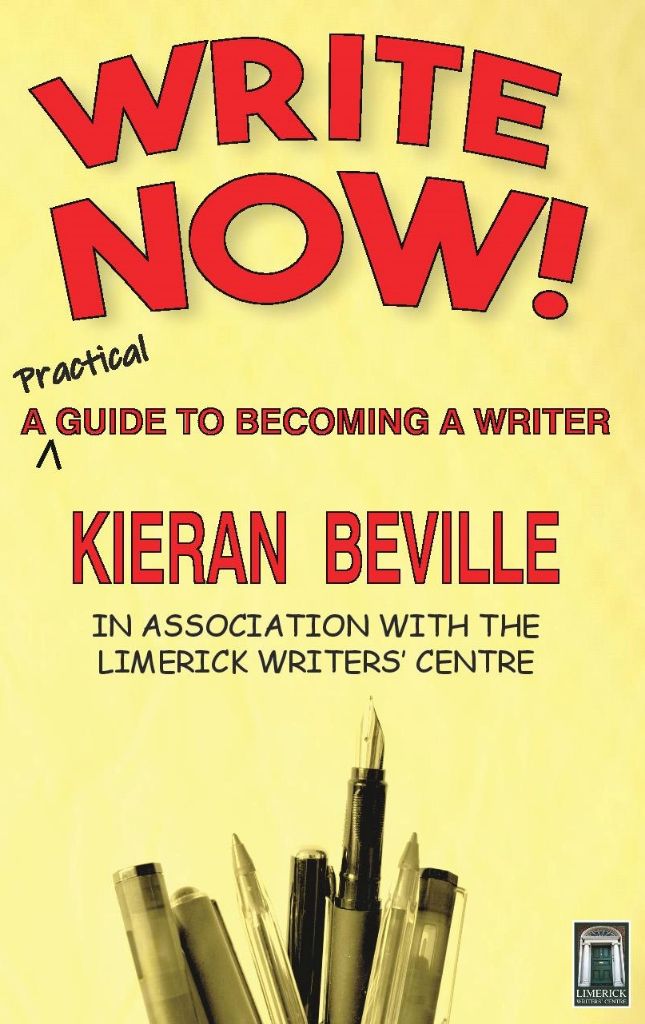 Beville tackles the tricky subject of style, not an easy attribute to describe but one he handles with aplomb in the chapter Personal Qualities. Style, as the author points out has to develop naturally from your own ability, opinions and emotions. In a nutshell style should be recognisable – that-is-a-Heaney poem, or Joyce-wrote-that sort of recognition. Readers have favourite writers and one of the reasons is that they like their style. I loved this chapter for its inclusion of excerpts from literature – they are a pleasure to read again and all are carefully chosen to convey what the author wishes to convey when writing about “style.”

Under the subheading Anniversaries I was fascinated to read Beville’s account of the Civil Rights March in Derry on the 5th October 1968 and his account of that bloody event published in the Limerick Leader on October 5th 2018, fifty years after. He introduces his piece by advising that anniversaries of the birth or death of famous people or of events in the past are the source of saleable articles to a wide range of magazines. They must be properly researched, accurate and well written. What caught my eye was the boy’s reaction in Limerick to that outcry, the vivid retelling, the up-to-date references to the cash-for-ash debacle, Brexit and ending with, “Many young men from Limerick and elsewhere in Ireland were politicized and that is in no small part due to images such as that of Derry on 5th October 1968.” It makes for powerful writing and of invaluable help to the article writer. One of the hallmarks of this book and one of the reasons I admire it is that the author is not afraid to personalise his approach to offering advice.

Developing Your Craft is a chapter I would recommend to the language teacher as well as the aspiring writer. There is so much sound advice here regarding sentence structure and in particular that first sentence. Topic or opening sentences set the pace and tone for the whole paragraph. It is crucial to writing in English and Beville relishes in the task of illustrating what is required in this area of language creation. Planning Your Writing and Revising are equally are equally elucidating.

His treatments of grammar use are quite funny and light-hearted with the author admitting that the singular or plural treatments of words like “staff” may be a do or die issue for the grammar police but it’s not a hill he is willing to die on., “so, please yourself” he advises. But make no mistake he is deadly serious when it comes to correct usage. This is an accessible guide to some basic rules, a do’s and don’ts. Novice writers and language learners would do well to pay attention to this chapter if they wish to get their writing in order. Grammar Aids Clarity is of course the key and he shows why this is so. The book reads like a well-oiled manual on how to be a good writer.

I also liked the way he draws a neat distinction between good sex and bad sex in terms of writing for film and in story, under the subheading “Write to excite”. Humour is never far from his pen as when he teasingly warns that “syntax is not a tax on sin.”

The trials and tribulations of writing a novel are detailed in chapters 13 – 20. He is up to the minute with his advice, for example: “As I write, the President of the USA, Donald Trump, is making soundings about trade wars with China and Europe. Is there a seed here for a thriller?”  he asks.

The writing of dialogue and setting the scene completes his expose on the novel per se but he does not let up yet – writing romance, that most popular of genres, is full of little gems of wisdom such as, “Do not use your story to educate readers about safe sex, law and order, political reform – unless it has the subtlety of allegory and the sensitivity of very gifted writing…the purpose of romantic fiction is to entertain.”

Historical, Detective, Thriller, Horror, War and Science Fiction are patiently explored and unravelled in the latter quarter of the book. The author knows that there are many kinds of writers yet each genre has its commonalities as well as its unique idiosyncrasies.

Then we move into the area of poetry, again, but this time in a somewhat more profound way. I immediately identified with his introduction when he quotes from an article, Making Rainbows, he wrote for the Limerick Leader 8 September 2018, about his appreciation and understanding of poetry. I know I am in safe hands here because Beville is first and foremost a poet a long time in the making. His understanding comes from years of being a practitioner and his observations on how the poem works are believable. Take this statement as an example:

A poem is more than the sum of its parts – like white light it can be broken down into its constituent elements in the spectrum where we see its many hues. But light is not something we actually see, rather it is a means by which we see everything else. So too with a poem – it engages the senses but helps us to perceive reality with fresh insight.

Beville outlines the origins and development of poetry as we know it in the English language he is fairly concise in this task and generously sprinkles his text with his own poems and early attempts with the sonnet form. A small point here is that I would have liked to have seen included something on the syllabic form in Irish Bardic and Irish Classical poetry with its accentual verse, function and status, socio-political and folk traditions. It springs from a written language older than our English counterpart and is the oldest vernacular literature in Western Europe. We may well get some of that in Write Now Vol. 2, together with  more detailed glossary of poetic terms.

Short story writing takes us to a conclusion and his handling of this most difficult of all writing would have made Frank O’ Connor proud. It makes for a fitting end to this course in creative writing and his opening quote leaves us much to ponder: A short story is a love affair, a novel is a marriage. A short story is a photograph, a novel is a film.” (Lorrie Moore).

After reading Kieran’s book I feel inspired to write stories. This book will inspire those who write and want to write, those in need of encouragement and reassurance as well as those who facilitate, moderate, tutor and design courses, workshops and writing classes. It will be a useful tool for those who teach English as a first or second language, those who edit and those interested in how words work. It is also for those in need of some spring-cleaning, a blast of refreshing air.

In his conclusion the author states that his intention in writing this book is to inspire, encourage and to assist in testing and developing whatever gifting or flair the novice writer may have. He has ticked all the boxes and achieved his aims. As a bonus the book ends with a very helpful Appendix on grammar terms explained.

Each chapter offers advice on how to market your work and, above all, how to take rejection. As Sam Beckett wrote, “Try again, Fail again. Fail better.” Kieran Beville makes it clear throughout the book that he is a reader. I have never met a writer who isn’t. This is a book for the reader who would like to find out more about what lies behind the written word.

Write Now! A Guide to Becoming a Writer is available from O’Mahony Books, Limerick and Quay Book, Limerick. On-Line at www.limerickwriterscentre.com

John Liddy, born in County Cork but raised in Limerick, is a poet whose collections include Wine and Hope/Vino y Esperanza (1999, Archione Editorial Madrid), Cast-a-Net (2003, Archione Editorial Madrid), The Well: New and Selected Poems (2007, Revival Press). Most recent book is Gleanings (2010, Revival Press). He co-founded The Stony Thursday Book with Jim Burke and edits occasional issues. Liddy lives in Madrid and is recently retired. He worked as a teacher/librarian. He also runs the annual poetry festival An Tobar/El Manantial, along with Matthew Loughney and the Embassy of Ireland.

An Island of Scribes and Bards by Kieran Beville. Part 1 – the Big Picture

Welcoming participants on our Creative Writing Course for Older People