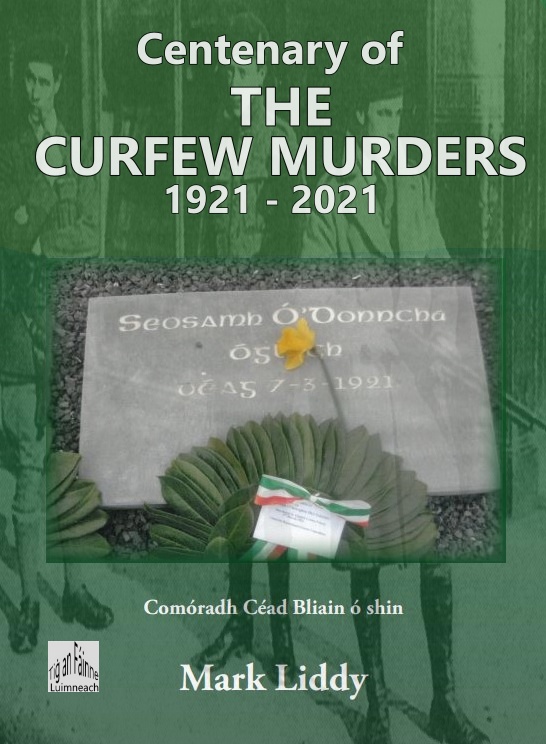 New History of the 1921 Curfew Murders

Retired local tour guide and historian Mark Liddy from Sycamore Avenue in Janesboro is publishing a new book called Centenary of The Curfew Murders 1921-2021. The book will be launched on Sat 23rd April at 4.00pm in the Janesboro Football Club, Pearse Stadium, Janesboro.

The book deals with the tragic murder of IRA Volunteer Joseph O’Donoghue on Monday 7th March 1921 by Crown forces. Mark Liddy has pieced together from the oral tradition and some independent family research, telling the story of O’Domnoghue and a generation of men and women who spoke remarkably little about the Tan War and the War of Indepenndence.

Joseph O’Donoghue was abducted and killed by the Black and Tans on the night of the 7th March and killed in cold blood. There is a street, O’Donoghue Avenue, named after him in Janesboro and a plaque commemorating his name. Joseph was murdered by the Crown Forces on the same night as the ex-mayor of Limerick, Michael O’Callaghan, and the Mayor, George Clancy. While the murders of O’Callaghan and Clancy received domestic and international prominence. Liddy has endeavoured to restore the memory of Joseph O’Donoghue, to place him on equal terms with the two prominent Sinn Fein republicans.

Mark Liddy, lives at Sycamore Avenue in Rathbane. He spent twelve years
abroad, living and working in Los Angeles and ve months in Homer,
Alaska. Returned to Limerick in 1995, and qualied as a Bórd Fáilte Tour
Guide in Kilnane at the Ballyhoura Tourist Oce, Co. Limerick. Became a
tour guide in Limerick City for St. Mary’s A.I.D. Ltd, e Alms Houses,
Nicholas Street, under the auspices of Shannon Development. He also did
‘History and Local Studies’ at (UL) University of Limerick.
For many years he conducted Walking Tours of Angela’s Ashes and Historic
Limerick from the Limerick Tourist Oce at Arthurs Quay. Contributed ‘A
Neighbourhood of Patriotic Names’ to 1916-2016, an Anthology of
Reactions, Editors: John Liddy and Dominic Taylor. Published in 2016 by
e Limerick Writers’ Centre.
Mark Liddy retired in 2017 and is working on “e Centenary of the
‘Curfew Murders’”, 7 March 1921 – 7 March 2021. He is also working on the
history of the Liddy name and tracing the family tree – a work in progress.