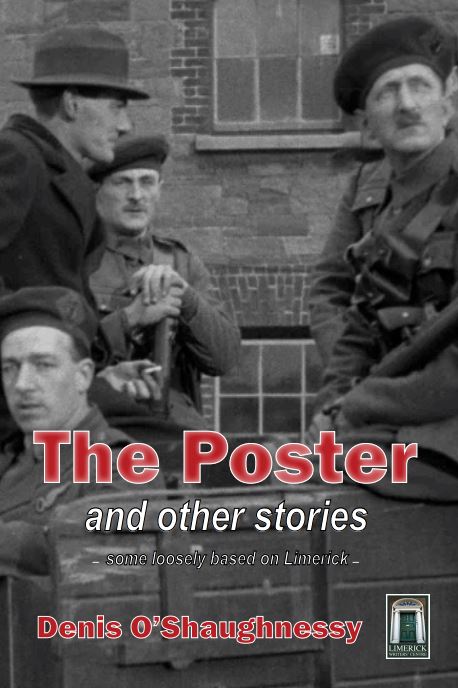 The Poster & Other Stories

This, my latest publication, is a miscellaneous  mixture of short stories, many with a local background, others  set in foreign climes such as Sorrento,  one or two alternative parables, a War of Independence tale with a tragic  outcome,  and a hidden secret which comes to light following a Suffragette protest meeting.

Altogether an eclectic collection which I hope will entertain you, dear reader.

(Pay here inclusive of postage and packaging to Ireland: https://pay.sumup.io/b2c/XL9DCH9Y9M)

Denis O’Shaughnessy has been writing books about Limerick for the past 25 years, and within their pages he has generally been acknowledged as capturing the character of the city, its nuances,  pathos and humour. He has also been a regular contributor to the Irish Times Irishman’s Diary,  Ireland’s Own and other publications.

This, his latest book of short stories (his second)  is a departure from the norm, but has included several fictional stories with some loosely connected with past happenings in the city. It is an eclectic mix, a boy’s encounter with the Black and Tans, actions of a member of Hitler’s Youth Movement as the  Allies swept towards Berlin, a puny chap who thought he had a look of Clarke Gable, a doctor who through his medical clinic tried to introduce the bible to the unbending Catholics of Limerick, and a story of  the Viscount Fitzgibbon whose statue on Sarsfield Bridge meets more than eye.

Denis O’Shaughnessy is a storyteller of the first order and like the late Jim Kemmy, is a guardian of Limerick’s past. – Con Houlihan.

Be the first to review “The Poster & Other Stories” Cancel reply